With “the cinematic moment” Directors Lounge brings together a selection of artists challenging the separation of film and art. Spanning a breadth of backgrounds and artistic styles, the art works are blurring the lines between cinema and visual while sharing the titular „cinematic moment“. … read more

I cannot remember when I put this rat mask on for the first time. Maybe I was born with it. I am not sure what is underneath. I never take it off: I sleep with it, bathe with it. I have heard people call me a rat and others a human with a mask. I …

END_OF_DOCUMENT_TOKEN_TO_BE_REPLACED

Ahead of the Berlin art week the Fata Morgana gallery opens an exhibition of works by Julia Murakami and André Werner that is as subliminal as it is immersive.

What both artists unites is an artistic approach that does not only reflects an existing reality but rather transcends into the imagery of new realities.

The multiverse of Julia Murakami is filled with layers of Greek mythology, Marvel heroes and Hollywood icons, a world unbound to gravity where dreams and Chimeras lure in the dark. Julia Murakami depicts this strange and surreal realm with a casual implicitness that, like old family photographs, triggers a moment of déjà vu. And, in fact, private photographs, self-portraits and memorabilia are often the starting point in the works of Julia Murakami. Images from unknown, yet familiar worlds.

André Werner is rather an observer than a producer of pictures. Like an ornithologist with a camera, he is a hunter and collector in the realm of the images. What get caught in his machinery of TV sets, cameras, printers and copiers, is often already an image of an image of an image. The pictures that are freely floating in the net, constantly multiplying themselves, are frozen in a single moment of their metamorphoses, not to capture them, but to celebrate their autopoietic beauty.

The alchemical process of creating such images is as important as the final output and the interactive video installation “circles” offers the spectator a chance to become part of such a play in a game with his own image. Louise Blissett Julia Murakami und André Werner 14.9. – 20.9. Fata Morgana Opening 14.9. 7 pm Finissage 20.9. 7 pm

Featuring an illustrated lecture by

The exhibition is kindly supported by Z-Bar, Directors Lounge and Bürkle IT

Julia Murakami, from the series Exercises in Levitation I–III, 2015.

Where are we going to? Videoart on the City phenomenon.

Video, discussion, reading, workshop, music and more on different forms and times of social presence and future in the City.

The project is a collaboration with Directors Lounge Berlin

Although the first part of the title that is borrowed by Gauguin and shimmers between pathos and esoteric for today’s eyes, ironically treats the idea to be able to give real answers to this question, but we believe that we can counterpoint it with Willy Brandt: The best way to predict the future is to shape it.

Especially in Dresden within the urban population trenches of incomprehension have been breaking open again about essential future issues. These preclude a bitter required lived and wider civically culture of discourse. Other areas of development, such as imagined future technical or scientific innovations, will not directly be subject of the project, but surely in their intended impacts on the life and work of urban society.

Because of the flexibility and relevance of the medium video works mainly of recent times on the current status and anticipated future developments of urban civil societies will be shown. Tensions will not only be addressed and discussed in the exhibition but in the whole programme. These result from a bondage by the past, from restrictions imposed by the capitalist system or from an individual or cross immobility on the one hand and the unalterable changes, the attempts to form them as a subject, the advent of new and unfamiliar on the other hand.

Distinguishing from purely political statements the project will deal with art, that means openness, indecipherable things, curiosity. The transitions between art and political commitment as well as social intervention by artists are fluent not only in today’s art scene. Of course, it always comes to the great and all. But since the civic dispute revolves not only around the principles of cooperation, but more often to everyday and small mosaic of coexistence, the big issues will also be treated in the artistic contributions that are often based on supposedly minor elements that make up the city and urban society: the kind of movements in the city, nightlife or graffiti, resistance, moral cowardice and intermediate stages, theatre, music, houses, brownfields or gardens. The city as a stage for its inhabitants, for those of the environment, for their guests. The city as a place of work, progress, science. It’s about living, the traffic, the exchange in the city. And about the always new exciting relationships between many in itself differently individual, milieu-, level- or class-related and across experiences, wishes, expectations within the limited geographical and social space of the city.

Although it is important to the curatorial team of the project, as indicated above, to include playfully many different aspects of the city in the discussion within the project. However, a red thread will always be the question of the development of forms of urban coexistence that do not constitute the battle of egos, but concentrate on community-oriented ideas. This includes both political and civic dispute and contention as well as a respect for the principles of mutual communication. But of course, also the knowledge that at these discussions very significantly also the way, the fact that they are lead at all, is the goal. In other words, in particular for the discursive part of the project, in the context with other projects and initiatives the goal is to make a contribution to the conversation in and about the City and its current and future constitution.

SOMETHING BIGGER THAN THE SPACE CAN CONTAIN
Kreuzberg Pavillon Saturday April 05th, 2014, 8pm

Something bigger than the space can contain brings together artists from diverse backgrounds in which shifting notions of house are played out from different perspectives: personal, political, economical and relational.

In Kim Collmer’s video, a playful miniature set house is submerged underwater and slowly descends into another realm within which text transmissions between two entities appear on the screen. Between the house’s descent and the textual inter-ference is a meditation on connection, connectivity and relation.

When Manos, a 50 year old man gets divorced from his wife, he moves in a new house in order to start all over again. Quite unexpectedly he discovers something spectacular. Ziggy, his childhood pop idol, is rehearsing in the most unusual of places. His attic.

Following the acclaimed German premiere at the 9th Berlin International Directors Lounge the wonderful film by Minos Nikolakakis will be screened again as part of Wild Horses #3, a dedicated night during the exhibition “Tribute to David Bowie"at Egbert Baqué Contemporary Art Berlin.

What makes this exhibition so extraordinary is that it’s not striving on the bandwagon of the first Bowie record in ten years. It’s curated fondly and with passion (something that’s rare these days) and stands on its own right. – Iriedaily

The exhibition is small but vital, seemingly capturing the soul of the popstar at that moment in his career. – Berlinified

We will participate at the “Network – C.A.R. exhibition” at the Zaha Museum, Seoul.

The Network – C.A.R. exchange project was initiated by the art fair Contemporary Art Ruhr and takes place from September 14 till October 14, 2012, parallel to the Korean International Art Fair (KIAF). 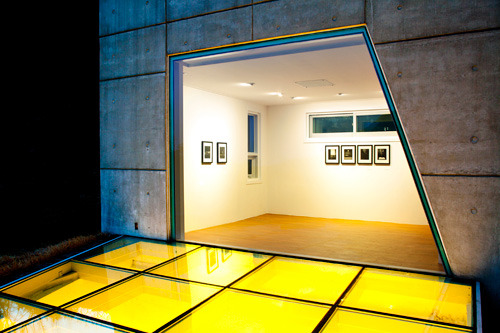