video works by Fabiana Roscioli, André Werner, Julia Murakami and Alan Smithee will be shown at the Mairie du 11.e as part of  Contemporary Art Ruhr in Paris during the Nuit Blanche in Paris.

A special all-media, cross-cultural exhibition featuring the highlights from our partners, the C.A.R. art fair in Essen, Germany, alongside original contemporary artworks by French artists debuting at the Mairie du 11.e 2011 on October 1, 2011 from 7pm till 1am.

We will present assorted highlights from the 7th Berlin International Directors Lounge, alongside new works, installations and photography. Due to the nature of an art fair we will focus on non-narrative and short works.

Have you ever seen an experimental film?  |  DL at Timishort, Romania

Directors Lounge presents a program handpicked by Alexei Dmitriev at
Timishort in Timisoara, Romania, May 7th, 5pm
We are showing great films from around the world that already became
classics, but were never screened at Timishort due to the festival’s very
young age. We tried to fill it with works that are very diverse in topics
and techniques so this compilation could be a decent representation of
experimental cinema, especially for the ones who never encountered it.

UNLITh
Mihai Grecu / France / 2007 / HD / 07’58’’
An abstract dialogue between men and black dogs. In this cold and hostile
atmosphere, their gestures and reactions cause subtle tensions to arise.
Aggression and perplexity mutate the bodies and distort their environment.

Uso Justo
Coleman Miller / USA / 2005 / DV / 22’30’’
A 1950’s Mexican melodrama is turned inside out when an experimental
filmmaker arrives in the fictional town of Uso Justo .
Existential and hilarious, intelligent and ridiculous….Uso Justo is a
mindbending
subtitled experience in black and white and color where all your wishes
can come true. Trust me.

Energie!
Thorsten Fleisch / Germany / 2007 / HD / 05’08’’
From a mere technical point of view the ordinary tv/video screen comes
alive by a controlled beam of electrons in the cathode ray tube. For
‘Energie!’ an uncontrolled high voltage discharge of approx. 30.000 volts
exposes photographic paper which is then arranged in time to create new
visual systems of electron organization.

Planet Z
Momoko Seto / France / 2011 / 35mm / 09’30’’
Somewhere… the PLANET Z.
Plants rule on this planet, and all seems harmonious and delicate.
But liquid and sticky mushrooms show up little by little, and destroy the
idyllic life.

On April 15th DL will hit the screen in Albuquerque with some of our favourite films by Keith Sanborn, Eric Dyer, Jean-Gabriel Périot, André Werner, Max Hattler and Ken Paul Rosenthal (Ken will be there in person!).

So if you are in New Mexico drop in to see what we’ve compiled. And don’t forget to watch the other programs (curated by our mate Bryan Konefsky, pictured here) that include the works by Gerard Freixes Ribera, Jodie Mack, Jeanne Liotta, Kerry Laitala, Wago Kreider, Marie Losier, Scott Stark and Martha Colburn.

Witness cinema like you’ve never it seen before! Experiments in Cinema is an annual, Albuquerque-based festival that celebrates recent trends in international, cinematic experimentation and offers a variety of ways in which attendees might think about the history of media representation and participate in shaping future trends in cultural representation. To this end we are deeply invested in year-long outreach efforts where we travel our festival to schools around New Mexico to inspire a new generation of home grown filmmakers to create movies in ways we might never have imagined possible.

DL at the LAAA

We are screening assorted highlights at the prestigious Los Angeles Art Association (LAAA) as part of  NOT A CAR, a special all-media, cross-cultural exhibition featuring the highlights from our partners, the C.A.R. art fair in Essen, Germany, alongside original contemporary artworks by Los Angeles artists debuting at Gallery 825 on April 9, 2011. Exhibit runs through April 29, 2011.

pictured: some frames from

BEYOND THE ATELIER TOVAR

A screening with Guy Maddin’s own personal selection of his short films, complemented by readings of the filmmaker’s book From The Atelier Tovar* by Kenton Turk.

NYman With A Movie Camera

Nyman With A Movie Camera is a 64-minute, shot-for-shot remake of Dziga Vertov’s Man With A Movie Camera with a live score played by the Michael Nyman Band. Nyman has been heavily involved in cinema for most of his working life, creating the Oscar-winning score for Jane Campion’s The Piano and numerous other features including Peter Greenaway’s Drowning By Numbers and The Cook, The Thief, His Wife And Her Lover.

“Deeply rooted in Vertov’s original ideas concerned with ‘the perception of truth’, the documentation of ‘life as it is’ and that of ‘life caught unawares’, Nyman’s film attempts to capture the essence of ‘what is there’, and reflects on what he calls ‘the persistence of glance’ a multi-sensorial experience of time as it occurs, of life as it happens and as recorded by the human memory. The film is a modern-day take on experimental documentary film making through the bias of cinematographic collage and proposes to renew a discourse with the ideological and aesthetic precepts once defended by Vertov in his pursuit of the ultimate ‘cleaning up’ of film language from the ‘corrupting influence’ of drama.”

“Nyman’s previous engagement with Vertov’s film dates back to 2003 when he composed the original musical score for Man With a Movie Camera. The encounter with the Russian master was instrumental in defining Nyman’s own aesthetic phraseology and experimentation with the medium of film and documentary. In Man With a Movie Camera, the shot sequence follows a systematic and paced visual pattern in an attempt to mimic the language of the visible, the raw and the unscripted.

“Vertov’s driving vision was to capture ‘film truth’ — that is, fragments of reality, which when organized together have a deeper truth that cannot be seen with the naked eye. Whilst Vertov’s rhythmic patterning unifies the aesthetic surface of his film, Nyman’s choice of footage for Nyman With a Movie Camera, is a random punctuation of a visual text drawn from his own film and sound repertoires and from his photographic archives. The result is a patchwork of imagery embroidered in Vertov’s threads of the newsreel and of the dogmatic values of the film truth.”

screening made possible in cooperation with Myriam Blundell Projects 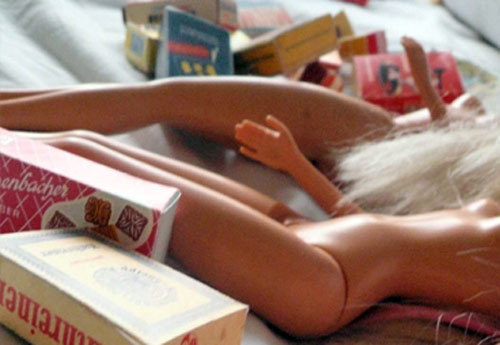 The story of a soldier of the International Brigades fighting in Spain against Fascism.

A common theme in Mark Maxwell’s work is the transformation of materials and their intrinsic physical qualities and characteristics, which are hidden to the human eye. His practice encompasses several mediums including mixed-media installations, videoworks and paintings.
Mark Maxwell has been creating video works since the mid nineties. He has produced many abstract pieces including works inspired by the microscopic electroplating of metals and, more recently, he has made forays into video direction producing the creative content at live events for bands such as Feeder and Roger Waters (Pink Floyd). In 2009 Maxwell was invited to create a video installation in a museum in Andalucia, Spain. The installation consisted of a large wooden construction, with an attic like interior which housed two video projections portraying dying fields of mournful sunflowers. The videos were projected directly on to the timber clad roofing. An assortment of mementoes and memorabilia lay scattered on the floor and on shelves, immersed in the gently moving video content, which was accompanied by the soft but incessant sound of flies and crickets. In 2010, Maxwell was presented with the opportunity to direct a short 30 minute film in Andalucia which focused on a story of a soldier from the International Brigades fighting against the fascism of Franco during the Spanish Civil War (1936).
The political tensions within Spanish society are still pertinent even today, and although Naturaleza Muerta (Still-Life) is an art film …it does, contain a narrative and also has a certain resonance which is relevant to all wars past and present.
With innovative timelapse photography and striking underwater scenes, the film depicts the spectacular and varied Spanish landscape and the plight of the injured soldier within it. (source: Myriam Blundell Projects)