Those who had the pleasure to watch Carl Elsaesser´s THERE IS WIND THAT BLEW during the 8th Berlin International Directors Lounge (or on one of many festivals where he gathered several awards) knew that Carl has a very unique and poetic way of telling a story.

Now he´s going to enter the holy grail of experimental film with Cruel The Ash, shot entirely on 16mm. To do so he needs your support through Indiegogo. A campaign to raise the needed money and your chance to get a copy of Cruel The Ash for as little as 10 $.

“The working title for the film is Brown Ash in reference to the tree used by Maine Indians to make baskets. The film is built in part around the potent metaphor of the threat to this tree posed by the emerald ash borer, which has yet to arrive in Maine but whose arrival seems eminent in the next five to ten years and leaves the fate of the basketmaking tradition suspended. The film is also an ambitious attempt to portray the entire life of a mother in the course of a single day: the choices she makes, the invisible strings that turn her head to notice the woods and define her hopes and fears. The two narratives, poetically woven together, expand and complicate our notions of Maine identity and begin to answer the questions of who we were, who we are and who we will be.”

(visit Cruel The Ash | Indiegogo and spread the word)

Guillaume Cailleau bridges conceptual working methods with playful references to the avant-garde. This playful mix of forms, expanded cinema, experiments with human perception, and poetic compositions makes the viewing experience very enjoyable for its richness. His sincerity, combined with a joyful wink  of the artist’s eye add to this impression. Explorations – or games – with color separation, the basics of color photography, are as much part his artistic arsenal as the lyric beauty of rich black and white contrast of high-con film combined associatively on an optical printer.
The artist will perform live, and will be available for Q&A.

OUT OF THE BLUE – Plötzlich wird alles anders

We are proud to announce Berlin artist, filmmaker and curator Deborah Phillips will treat us again with a program based on film, and mostly presented on 16mm film. The artist is one of the most active promoters in Berlin in sharing her love for film and analogue techniques. The program for sure will comprise rarely seen treasures. And, we are expecting the world premiere of her new film “PFFFHP TT!”

Two films, two film essays about public space. One is based on performances including public interventions on urban plazas in Hannover and the second film explores encounters in public space in Gropiusstadt, a modernist residential area in the South of Berlin. Both films bring forward issues of public space and urban development: Will public space disappear under the changes of globalization and the development of an electronic public sphere? Are there new meanings and new functions of urban public space that could reactivate public space also in urban areas outside of the historic center of cities? Do we still need public places, or urban community space in the larger metropolitan areas?
Both films developed from visual researches in the respective urban areas and may be best described as visual essays.

Klaus W. Eisenlohr is a lecturer at Photocentrum Kreuzberg and at Lexia International in Berlin. His media are photography, film and new media. Johann Zeitler mainly works with painting, performance and drawing. Both artist have collaborated on urban and film projects since 2003.

“Never very good technical quality“, "no sharp image“, "no tripod“, "everything kind of shaky“, "mainly things that are not interesting“, "no story“, "no one idea“ – when reading these quotes from Seppo Renvall on his own films, one could think he is practising some kind of anti-aesthetic. However, Seppo Renvall does not want to cause offence or a scandal. Rather, his "negativity“ is set against the grand gestures that predominate media, and the superlatives "most“, "best“ and "highest“ required by the art scene. Theodor Adorno uses the term "negativity“ in conjunction with resistance and connected with a countenance that does not allow reconciliation with the power, or the "wrong“ social situation. Since then, times have changed and this society may not any more require a "life in alert“ (Walter Benjamin) but now urges a life in agitation. Seppo’s negativity seems to be more gentle, and seems to function more as a shield or as subversion against that constant state of arousal the media and the art world expect from the arts and the artists.

"If something interesting is happening, I possibly decide to shoot in the opposite direction“, and often he finds something more subtle, more telling than the spectacle ahead. His sympathy goes to the little things in life, or maybe I should say: empathy. His films thus carry his empathy to the small situations in daily life. As a consequence, part of his work is made of home movies showing scenes with friends, family life, children and travel, shot and shown on 16mm.

The themes of his other films are quite divers but still connected with daily life, even if they seem to embrace the spectacle, like "Nonstoppampam“. In this (in original) 3-channel work, an array of gunshots is fired in rapid succession. We possibly need to know the fact that these people shoot with a real gun for the first time in their life in order to see, what S. Renvall was mainly interested in: the awes, the hesitation, the threat and the surprise on the recoil forces reflected on their faces “Exotique” and “Yötähteni” talk about spaces of in-between, between light and shadow, night and day, unconscious and waking. Combined with the music of Aslak Christianson and others, many of these films, mostly edited on video, become songs, rhapsodies of life and a strong subversion of the mirror, which the TV screen seems to be for us.

Seppo Renvall will be present for Q&A.

“I like the destructive power of fire”, a friend stated to Riccardo. It became the source for the title of the show in Berlin. Riccardo’s fire might be his anarchistic disposition to destroy static concepts. However, he does not avoid the pains, the exhaustive efforts it takes to make art from “happiness”.

In his process of working with film, the painted film became the silent musical score for the making, the re-photographing of the film. By means of an optical printer, he developed a way to have light reflected from the 3-dimensional surface of the paint, while at the same time still illuminating it from the backside. Although such animation techniques usually are tedious work, Riccardo already tried to achieve some immediacy while printing film to film. This urge for directness, and a need for improvisation and contact with people have possibly let to his more recent body of work: “Shooqui”. The whole series of videos, which involves throwing peas or clothes, is the opposite of camera-less film. The artist holds the camera, aiming and tracking the prospective trajectory of the object being thrown by his other hand. The body connection between holding and throwing leads to a compulsive and circular movement of the camera when throwing larger objects. “It is almost like the recoil action of a gun upon firing.”
(Curated by Klaus W. Eisenlohr) 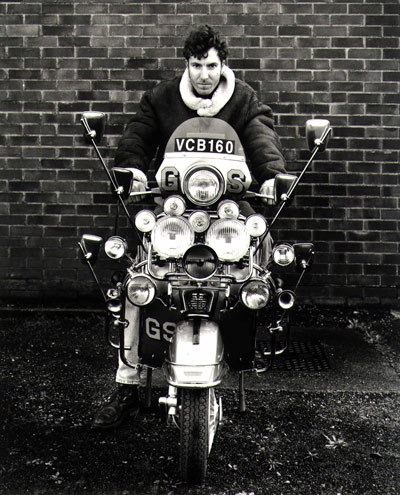