This short film is a series of beautiful, black and white images mirrored from a central line of division, like a simpler version of a kaleidoscope. Mostly, we see portions of zebra skin, the stripes forming and reforming themselves according to the camera’s position. Later, a full head, doubled as in the earlier shots, appears, as does that of a gazelle. While the film is greatly pleasurable on an aesthetic level, it loses what it might have built upon through the extremely repetitive soundtrack, a few bars of (albeit fittingly dream-inducing) melody that are looped rather than developed. Oddly less than the sum of its parts.

What goes on during those long Finnish nights? One film, shown in the “Unnatural Resources” section of films, all from Finland, might provide an answer. Night School certainly earns the title “offbeat”, and then some. This excursion into disconnected imagery had the audience sitting forward in their seats again with their eyes wide open. It begins with cold interior shots reminiscent of Kubrick’s 2001, with a young man standing before a Star Trek-like octagonal portal. We are soon on the soft shoulder of a out-of-town stretch of road and see a scantily clad young woman who appears to be hitchhiking and then dragged lifeless from the scene by a man. The mood has gone from alienating to disturbing, but quickly switches to bewildering when an animated toy-like panda shows up in the same shot. An animated panda? Why? Before the now highly attuned audience can figure this out, a stumbling chef appears in the same night scene, emerging from behind a bush. What to make of it? Then we are back to the cold interior with its machine-like hum in the background, and the initial figure intones “Hello to me, hello to you,” and further words centring around talk of an “institution” strung together in a bizarre half-speech, half-melody accompanied by sign language. Then the chef, (animated) panda and the girl from the highway scene appear side by side in the space behind the aforementioned portal, moving in stiff unison. Where can you go from here? Well, of course to a completely white living room, where the young man from the first scene, devoid of emotion, tells the panda, sitting next to it on a couch, “I think you are really hot” and “I have these feelings for you” and more, to the squeaky-voiced protests of the panda, who nonetheless turns up with the young man in a bedroom, obviously contemplating whether to have intercourse or not. This scene has the feel of another Kubrick work, the uncomfortable bedroom scenes of Eyes Wide Shut. The panda says, “I’m leaving you” and soon the same young man (who is in fact the filmmaker) is shown as the girl (or transvestite) from earlier being urinated on by two chefs, talking all the while. Soon, she is under a table and performing fellatio on one of three chefs, all of whom have been speaking robotically in unison, the word “ping-pong” coming up most often. In the end, the “girl” is standing up and smoking a cigarette, trying to speak with semen dripping out of her mouth in copious amounts. Is there a message here anywhere? “Exercises for assimilation into a total institution,” according to the filmmaker. The question might be, does there need to be? What Erkka Nissinen achieves here is the disjointed logic of dreams, coupled with a highly unusual sense of humour which won’t likely be forgotten too quickly by any viewer. Only a cartoon oddity called Sealab Uh-Oh ever left me with such an odd aftertaste. The surprise submission certainly turned out to be “that film” of the evening, whatever the intention might have been. Worth a watch, certainly. You’ll never see pandas in the same light again.

Unnatural resources is a small selection of works which are dealing with the human dilemma between whether to detach or immerse itself from the environment that has been defined (by the humans) as ´nature´. 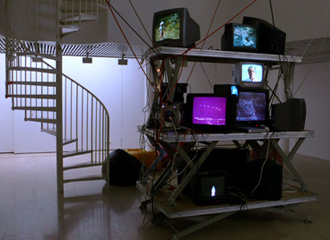 Helsinki-based FixC is an independent artists co-operative, which was launched in april 2007 to generate, distribute and promote video art, media art and experimental cinema and to produce curated touring exhibitions, arrange screenings and special venues with artists talks.