Istanbul has drawn a lot of attention in Germany, lately. It has become a city fashionable not only for visits, but also for projects in architecture and art. The history of the past 60 years has been one of success. An incredible growth from around 1 million to estimated over 14 million inhabitants has been handled without the emergence of slums and widespread poverty combined with criminality as many other mega cities in the world have. The economic boom of the last 2 decades, based on a moderate modernization in the past and a growing middle-class, has also created a demand for democratic renewal on one hand. On the other hand, a new class of powerful rich in combination with a globalized monetary-economy try to further accelerate economic growth in the city, which causes a lot of controversies and a rising number of people possibly loosing the battle for urban renewal.
The films in this program show glimpses of different developments in the mesh of urban renewal. All of them combine artistic observations with a large sympathy to the people portrayed and places shown.

artizinconnu TR
The City and The Memory – Have you seen Sulukule? 08:40 2009
Sulukule is a former Romani area in Turkey which has been taken down by the government. Its inhabitants have been removed to Tasoluk, 45 km away.

Bingöl Elmas TR
Hey Neighbor! 44:45 2014 WP
One of the results of the urban transformation in Istanbul is the abrupt conversion of old neighborhoods into luxurious estates. The communities that have no relations with each other happen to find themselves side by side. Ultra-wealth and poverty have became neighbors. The film investigates both sides and the impossibility of relations.

Sirin Bahar Demirel TR
Living with Leviathan 11:00 2013
Through a personal story about the nationwide uprising in Turkey in summer 2013, the “Occupy Gezi” movement, this movie tries to show how the Turkish youth says “No!” by reclaiming the city against an over-reacting government and brutal police force.

The artist Doris Schmid, who lives in Berlin, works in very subtle ways with the meaning of images, and against it. She uses the instance of implied narratives, or better saying the seduction of narration as an opportunity to enhance other image qualities such as perceptions of time, augmented spacial illusions, the vanishing of the image, or its apparition. Schmid for this purpose uses layering of video images, and then condenses them by a meticulous editing process.

Layers bring different or similar images together and create a multi-dimensional image composition. Initially however, the layers are being created by projecting on 3-dimensional surfaces, instead of digital compositing. These surfaces may be hand-made cut-outs that look like drawings from stills, or they may be moving surfaces, projections from a car or a train onto houses; but they are always closely related to the moving image in some ways. The final videos seem to have an analogue and performative quality, and they thus unsettle the common image perceptions of film.

The artist will be available for Q&A. Curated by Klaus W. Eisenlohr.

Bernd Lützeler, artist and film enthusiast who works with Super-8 and 35mm, also combines film and video in multi media installation work. In his work he is concerned with sound and image as distinct interfering media and their relations with technology and society. Also, he takes a specific interest in aspects of the audio-visual pop culture of India. He is a strong collaborator in order to create and exhibit. He worked with Kolja Kunt and Eric Wilhelm da Cruz on several projects. Part of the presentation will be an adapted super-8/video live show of “Eternal Showdown”, and a film by his colleague Eric Wilhelm da Cruz.

This is set of videos by Brasilian artist Elaine Tedesco, a selection of works created between 1988 – 2012 and a work in process that she is realizing in Berlin. Divided into 4 groups: Video performances, domestic video notes, conversations and photography, it shows estrangements on looks at the daily life. Elaine Tedesco currently stays in Berlin at an artistic residence promoted by Instituto Goethe.

Szenario, a collaboration of the filmmakers Philip Widmann and Karsten Krause appears to be a documentation about a love affair; a chronicle of 3 months in fall 1970, when a married man called Hans starts an affair with his secretary, called Monica, also married.

The main character of the film could be called “the suitcase”, though, a collection of notes, photographs, tickets and other papers from a suitcase, apparently collected by “him”, the male lover. The notes conof diary entries, where Hans meticulously wrote down every date he met with Monica, how long they had sex, and in which position they had intercourse. He also added to the record the places and circumstances they met, yet and always in the spare lasistnguage of a book keeper or bank clerk. The typewritten notes are spoken by a female voice, while the film images show passages of urban landscape of Köln, mostly slow tracking shots, some of them from car, and both at night and at day time.

What looks like a straight documentary at first, however, turns out to be something altogether different if the viewer looks more precisely. It turns out to be a sophisticated narration that keeps irritating by indulging the viewer into the immersions of story telling on one hand, and showing doubts on its own media:
contradictions in sound, picture and story telling. The techniques of irritation or Brecht-like alienation effects start right from the beginning. It is thus worth to try a more close reading from the beginning again, of the opening scenes of the film. A young woman with large red glasses starts reading from a script. -*°°*-  Full text at richfilm.de

Crop is an astounding video piece about a state-owned newspaper building in the center of Kairo. Filmed in 2012 shortly after the revolution in Egypt, the video represents an interesting, historic moment in time, and it is at the same time a reflection on image making and image representation in times of political changes regardless of local bounds or temporality.

Set at the press house of Al Ahram (the Pyramids), a conservative newspaper that has been the national official press organ since President Nasser, the viewer is guided to explore the rooms of the house from the top down, following its hierarchy of places, literally from the representative offices down to the cellars with printing machines and packaging of newspaper bundles. While the camera unfolds step by step the complexities of a building, a photo-journalist talks about the beginnings of photo reportage in Egypt. He tells us he missed the revolution staying at the hospital. He speaks about the restrictions photo journalism has had to face from its beginning both from a conservative islamic society, and a regime controlling every publication. At first the journalist seem to be one person, but that is a fiction. His narration actually is a composition of 19 statements of different interviewed journalists, whose opinions differ in complex ways. The sound track of the film is comprised of two separate layers: the ambient sound that goes along with the passage of places that we follow inside the building, and on the other side the voice-over of the interviewed journalist. This voice-over creates a real contrapuntal montage in the sense of Eisenstein’s statement on sound film, whereas the ambient sound creates a poetic flow of images, a narrative of space.

The film, a collaboration between the video artist Johanna Domke and the film director Marouan Omara, was in several ways a lucky moment. Domke had planned her residency in Kairo at Townhouse Gallery before the beginning of the Arabic revolution, and the filming itself, including all the preparations and necessary permissions, was only possible in that short period of time of changes before the new regime took control again. The film thus represents a unique time in history while at the same time it gives a comprehensible glimpse of what it is like to work as a journalist under the restrictions of censorship. As Johanna told me, the team always asked for where the censorship actually had taken place, and were always referred to a different department. There was no official censorship office or censorship management, it was just part of the system as a whole. In certain ways, the press house depicted in the film truly resembles Kafka’s castle, where the power never manifests. Watching the film on the other hand may also give the impression of utterly familiarity with the building and its subdivisions, its poetry of space, the familiarity of bureaucratic space. In “Poetics of Space” Gaston Bachelard talks about the philosophy of space using a big family house as an example, something I always felt to be imperfect at least in reference to modernity, and in certain ways, the film “Crop” completes the picture of a modern poetics of space.

The artist, Johanna Domke, will be available for Q&A.

In attendance of the artist

Jonathan Rescigno works with a documentary approach towards his films, while transmuting into fictional stories. His starting point are day-to-day issues of his close surroundings, which then can shed the light to some greater matter. At the time he combines narrative methods with elements of early Avant-garde and Nouvelle Vague.

His search for a personal language and expression beyond the documentary school urged him to progress from earlier studies at film school to art school in Metz and further to “Film and Creative Documentaries Direction” in Strasbourg, where he finished his Master. His pictures combine a sensitive research of places and people with an essayistic image-oriented montage creating open and atmospherical depictions that give to the viewer space for interpretation.

In his films, Rescigno keeps coming back to themes concerning the region Lorraine, where he grew up. Lorraine used to be the prospering French coal mining area, connected with the German Ruhrgebiet by the so called Montanunion (European Coal and Steel Community) after the Word War II. With deindustrialization, the region has undergone difficult changes still under way. The films of the artist investigate questions of identity in the changing post-industrial landscape, and when the term migration is at risk to change meaning in French society. 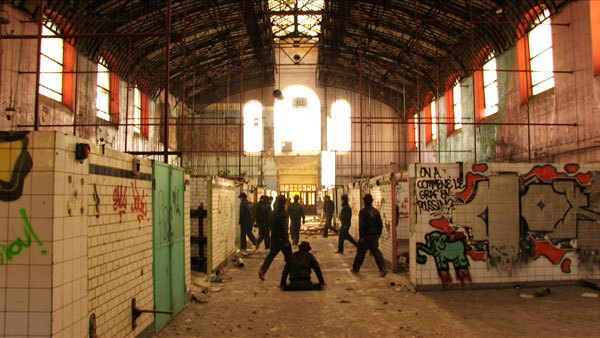 Karl F. Stewart makes a mark in digital photography and video with his saturated colors and his rigorous compositions showing urban landscapes. He works with a photographic hybrid combination between still images and videos that do not hide their origin in their photographic concept. After being a documentary photographer in the 70’s in Pittsburgh, his home town, he worked as an English lecturer in Italy for 24 years, before he took up photography again only 5 years ago, now going fully digital.

San Francisco, his next temporary residency after Italy, became his starting point for his relaunch in photography, where he mostly explored the downtown area. Not just the financial district of San Francisco, but a big part of the highly dense urban areas show an amazing economic growth with glossy surfaces and artificial contemporary green landscaping on one hand, and wide spread poverty of homeless people on the other. “The Unearthly Beauty of Simulated Nature in Contemporary Architecture” is Stewart’s most pronounced piece from that period, presented as a video-photo essay. At the same time, the artist started exploring motion-blur and photoshop cut-outs. “Impressions of Movement” is a series of panoramic works that resulted and which he continued in different countries such as USA, Italy and France. The time-based presentation of digital pictures, that seems to be natural to the medium, led to digital video as his preferred medium at the moment. The artist recently moved to Düsseldorf, where he continues exploring landscapes and urban settings in often unearthly colors. Like with “K-20”, showing a small fountain at the K 20 Museum in Düsseldorf, the examinations of urban-nature relations combined with sometimes witty surprising experiments, seem to propel his creative energy most successfully.