(Editor’s note: The filmmaker is Canadian, not American, as stated in the program. She is based in Montreal, but has been spending the greater part of her time in New York as of late. The soundtrack, however, is credited to an American. Her film was submitted to DL from New York, hence the confusion.)

Katherine Liberovskaya’s film Take-Off is the kind that may not find favour with all. It is however, in what I believe to be its aim, successful. The film begins with close-up shots of a mosquito, over which we hear the insistent drone of the soundtrack (courtesy of Al Margolis, a.k.a. IF, BWANA). The mosquito gives way to a housefly in similar close-up, its wings fluttering at high speed, waiting to “take off”. This goes on with little change for such an extended period of time that the viewer becomes lulled into lazy voyeurism; similarly, the soundtrack’s drone has a curiously agitating but largely soothing effect, much like that accompanying the hum of a washing machine. So hypnotized into a dreamy state is the viewer that it is with surprise that he notices about eight minutes into the film that the fly is suddenly no longer there: a shadowy image change has replaced it with a helicopter of similar size on the screen. It has already “taken off”, and we are witness to similarities in sound and intent between the two. Now that we are aware that we should be prepared for unexpected changes, we are a little more attuned to nuances of image, and we pick up more readily the interplay of layered pictures. About twelve minutes into the film, we start to see these hazy multiple images of helicopters come together so that it appears we are seeing two mating in mid-air. What we are looking at now is a electronic moving image painting, which eventually leads us back, for symmetry’s sake, to the housefly, which itself takes off. Those who approach a film like this waiting for “plot advancement” will surely be disappointed, but those who are prepared to take the time to be mesmerized will most likely enjoy the experience. The strength of Liberovskaya’s film is in the time she allows for the images and sound to take slow effect. In a world of instant pleasures, a film like this can be a refreshing change. 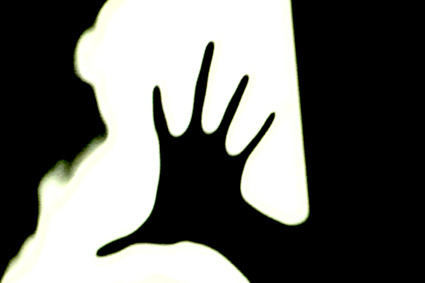 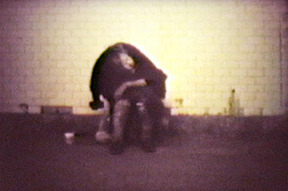 It’s impossible to look back at 1985, the year my father died, without feeling bitter about our relationship. To his consternation, I became interested in art, classical music, and shooting/editing moving pictures. These were useless things that didn’t fit into my father’s very practical notion of life. But I am what I am, and I shot what I shot. And I’m still shooting. And I guess I’m still a little bitter. Neil Needleman

The Super 8 camera opens up with a 1985 shot of a beggar/homeless type crouched on a city sidewalk slowly keeling over this way and that, falling into sleep or a stupor while subtitles reveal that the filmmaker has always liked filming wasted time. Next we are in the hospital and camera is turned on the filmmaker’s father, recently pronounced brain-dead, but twitching involuntarily. It’s a macabre sight, all right. It seems dad always thought his son’s filmmaking ventures were a waste of time, and as it is years later still turned on subjects like a man with a sign on his chest staring blankly as pedestrians pass on both sides and a setting sun, the subtitles, directed at dad, aver “It’s still my time to waste, and my world to envision.” A stripped-down piece that makes you think of your time being up, and what you choose to do with it before. 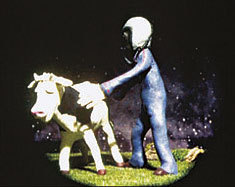 This was a funny little bit about one night’s misadventure while “cow-tipping”: pushing over sleeping cows to witness their bovine reaction. The voice narrating is casual and goofy in a charming way, and the tale of getting out of a car drunk in the country at night and walking straight into an electrified fence not once but twice to the imagined guffaws of the cows had the audience laughing out loud, too. Did I mention the story was told with stop motion animation and plasticine figures? An entertaining piece. 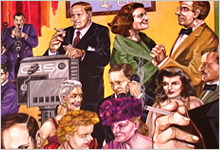 A real gem of a story, the uncut diamond variety, was Meeskeit, identified as Yiddish for “uglier than ugly”. The story, told in English as we look at a series of paintings, concerns the woman narrating off-camera, whose sister had a hidden ability, revealed when she left to her a series of paintings in her suicide note. Black humour is mixed with a truly heart-rending tale that reveals itself while we look at the paintings, all containing faces of various relatives in situations she decided to put them in for one reason or another: Uncle Simon romancing his aldulterous wife Rita, who he in reality murdered, along with her lover; “mental case” recluse Schlomo pictured in high society; mother and her bitter rival sister portrayed placidly side by side; the thieving servant toting bibles; Jewish-turned-Christian Uncle Morris as Christ himself in crucifixion. Most poignant is the painting of the two sisters, favourably reproduced as winning beauty queens, and the subsequent revelation of sketches depicting them in the incestuous affair they had, as untouched, unwanted virgin spinsters seeking some kind of love somewhere, after which they spent thirty years with uneasy eye contact. All to be sold to pay for desperately needed chemotherapy, except the sketches of the affair, to be thrown out when the living Meeskeit passes on. All told in a few minutes that are penetrating and hard or impossible to forget. 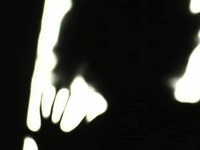 This bit of shadowplay is not completely uninteresting to watch, but it hardly seems to have a point. If only meant to be a visual pleasure, then enough time wasn’t given to hypnotize us. Someone plays with their fingers and we see only their shadow, spindle-like against a cold white background. A foot is briefly thrown in for good measure. An insistent drone underpins it. What was the intention?

Judge for yourself: Disforme screened in cornucopia | DL mix I, Fri 12th 10 pm