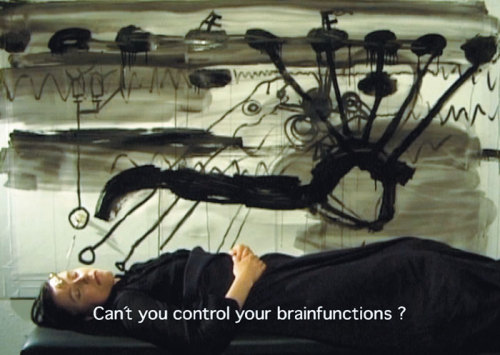 in attendance of Josephin Böttger

Josephin Boettger, video artist, lives and works in Hamburg/Germany. Between 1995 and 2002 she produced various short films such as experimental and drawn animation films, shown on international shortfilmfestivals. Since her diploma at the HfbK (visual communication) in Hamburg 2002, she works on 3-6 channel videoinstallations and single-channel videos, shown at numerous international solo and collective exhibitions.
Screenings with the project “video graffitti/mobile projection in public space” 2007 in Manhattan (NY) and Basel (CH), 2008 and 2009 in Hamburg (DE).

Hibernation Hibertalk draws the viewer into the inner ear of our most intimate narratives, the sequences of fragmented imagery strung together and emitted while we sleep.Busy mental processes extracted as inconclusive writing on the wall, a palimpsestic hubbub of swirling graffiti and scribbles.
The protagonists are depicted as sleepwalkers meandering through collapsing gameboy architecture, cohabiting modernistic primeval forests with a brown bear which might or might not be a nocturnal alter ego, or are seen as urban campers waking up to oddly unperturbing helter-skelter nightmares of subconscious demolition. Scientists in white coats wander in and out of dreamt laboratories, dissecting brains to unleash cranioscopic graphic energy.
Overall, the varying rhythms and the bubbling, composite soundtrack of noises and voices creates a mesmeric kaleidoscope of sensory activity, a literally endless narrative of the same bits and pieces of subterranean junk we concoct every time we tumble into sleep, collectively or individually. 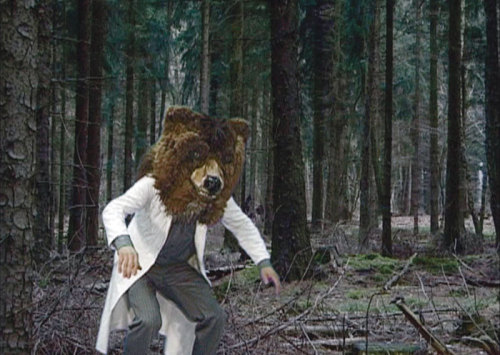 Trapez is the cinematic observation of a growing building site. The reality of construction and deconstruction is distorted by drawn elements and accelerated by a rhythmic luminosity.
Using time-laps photography, the documentary of work, demolition and construction becomes an homage to the urban absurdity.