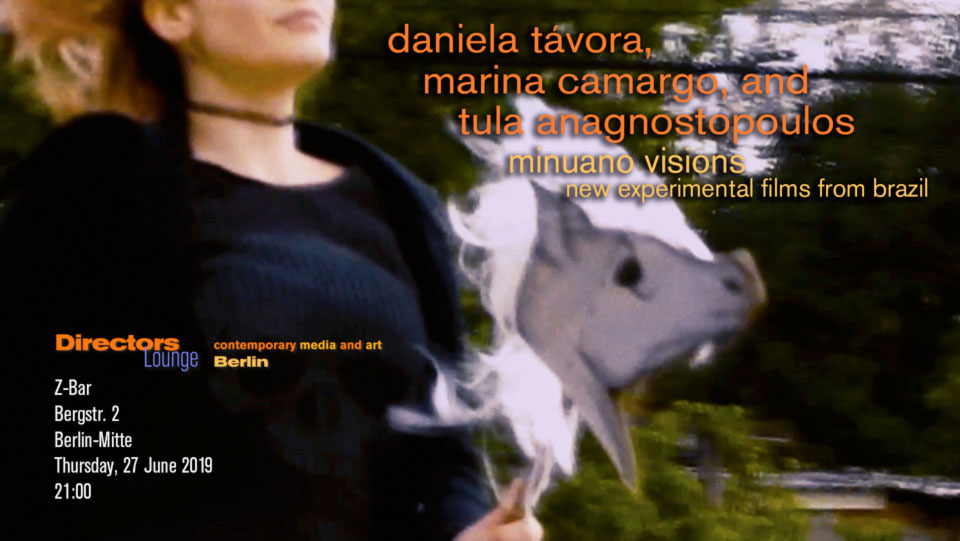 Three Brazilian artists from Porto Alegre present their films on the occasion of the German-Brazilian exhibition “Techné” at Verein Berliner Künstler. “Minuano” is a strong Southern wind in the South of Brazil, bringing a cold stream from the Antarctic, with mostly clear sky, similar to the Mistral, a falling cold wind in Southern France. The name Minuano derived from a native Indigenous landscape but is often quoted in the popular, colonial Gaucho culture. “Minuano Visions” presents films and videos different to the European expectations of tropical culture.

Marina Camargo, who lives in Porto Alegre and Berlin, works with concepts dealing with landscape and geography. As contemporary geography also deals with local history, her films combine local stories with an artistic research, which may be called art topologies. Marina usually records her own footage but she sometimes also uses found-footage in a style that is more similar to documentary films using archive material.

The films of Tula Anagnostopoulos are connected with memories and personal stories on the verge of being lost through contemporary culture and political changes. Some of her films are talking about the family culture of rural and small city heritage coming from a German and Greek emigration background. She is often using analogue films that are being projected onto surfaces or changed by the reverb of re-photographing images.

Daniela Tavora records experiences of her private life and creates scenes in her personal surrounding in a kind of guerilla style, and she sometimes mixes it with found footage from the internet. It is the personal experience of youth-culture and her love for horror films and white trash that influences the films of Daniela. Also, Brazilian narrative underground movies, a genre called ³Boca do Lixo², play a role in the style of her experimental video work.

Marina Camargo and Tula Anagnostopoulos will be present for Q&A. Elaine Tedesco, curator of the exhibition “Techné”, will talk about the work of Daniela Tavora. Curated by Klaus W. Eisenlohr.