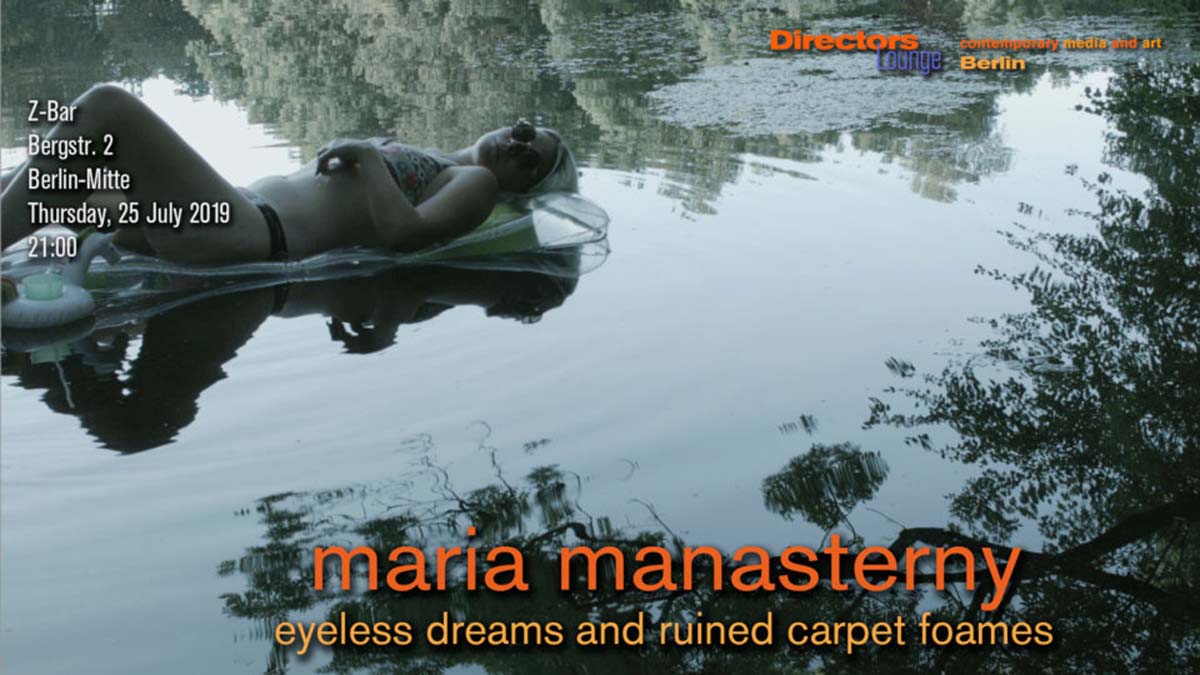 The film work of Maria Manasterny combines a broad variety of different genres, such as animation, docufiction and experimental film by her joining artistic attitude. The narrative substructure, the open experimental design and her love for film are common to all of her films. Her love for films becomes evident in many subtle quotations and film references. The artist concluded her studies with a Meisterschüler degree at HBK Braunschweig and lives and works in Berlin, since.
Argos Augen (Argo’s Eyes, 2014) is an experimental fiction, set between dream and reality, which is a recurrent motive in Manastreny’s films. A voice-over reflects in a dream-like and poetic way about whales and whale catchers in her own family. The text is being linked with images of the domestic life of an older generation during night and daytime. Time seems to be floating. A young protagonist appears to be a visitor, a passer-by not belonging to this place but interacting in intimate ways. A feeling of memory and farewell to a once familiar surrounding emerges between stages of waking and dreaming.
Fully realized with found footage, Better Safe than Sorry (2018) is a story told by a female narrator from the perspective of an investigative reporter. She only appears as voice, and tells about secret bunkers at Niagara Falls and a private organization committed to help the affluent to construct a possible survival scenario in the worst case of atomic apocalypse and a future after. The images are mostly connected with the collective end-of-the-world phantasies from the eighties and thus bear a melancholic touch. At the same time, they win a new, current actuality by the expressed urgency in the film.

Das Leben vom Diwan aus (Live, as seen from the divan 2017) first seems to be a surreal story between traumatic experiences, dream and hallucinations. More so, as the young protagonist’s experiences are being confronted with a medical and professional surrounding that do not take her for too serious, as it appears. In fact, the story told in the film is connected with an autobiographic experience of the artist, who once suffered from a tar-like poisoning of the breathing organ. The film starts again with a voice-over from first perspective, but then passes the voice to visual dialogs with single protagonists who seem to stand or sit opposite to the narrator. Thus, a specific subjective perspective evolves, connected with the first person narration from the beginning. The traumatic and surreal appearing story becomes even more condensed by this unique first person perspective consisting throughout the film, even if we follow the protagonist through other dream-like sequences.

We are proud to feature the dense and poetic film work of Maria
Manasterny. The artist will be present for Q&A.