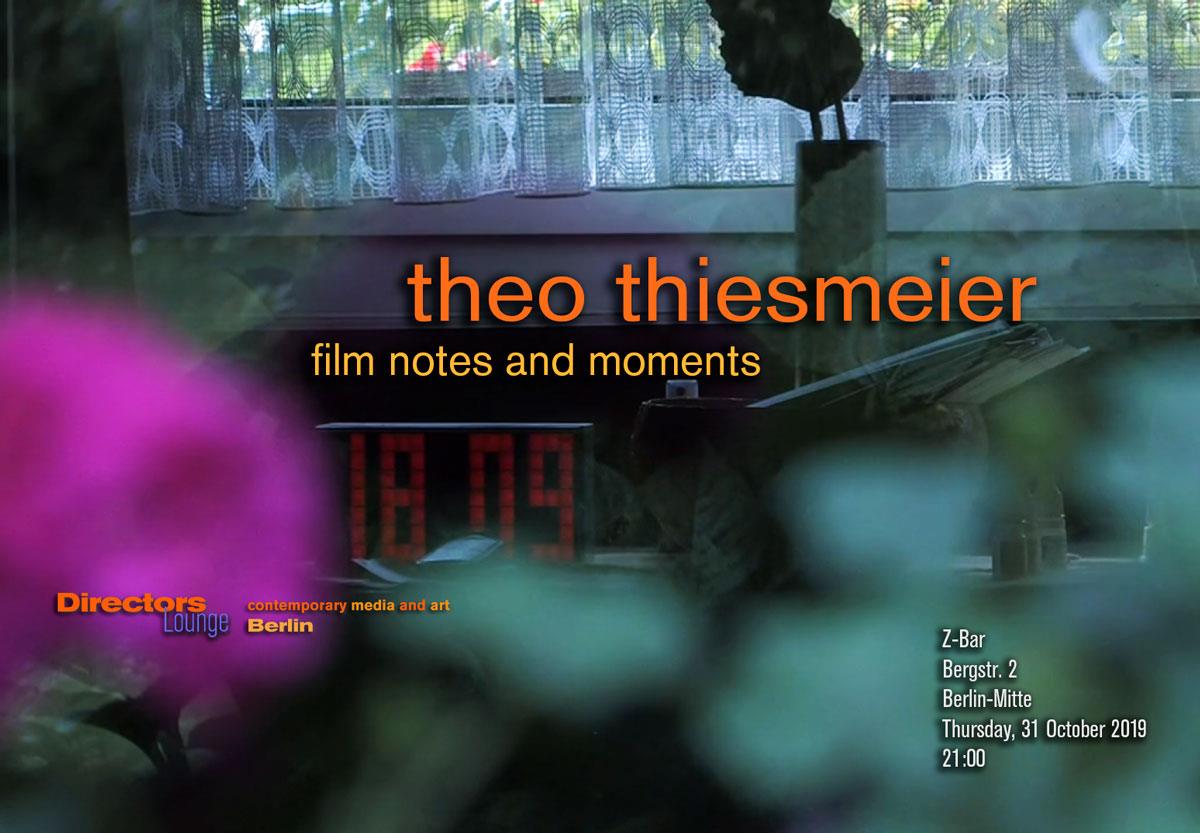 Everyday experiences are the subject of filmmaker Theo Thiesmeier, also in his works with still photography. The Berlin artist studied with Peter Kubelka in Frankfurt and Robert Breer at Cooper Union, New York. For ten years, he was also part of the collective of curators of Filmsamstag in Berlin.

In his films, the lens becomes an active observer, which also provokes dialogues with the camera. Thiesmeier does not hunt for spectacular moments, but he is interested in daily scenes that otherwise would pass by unrecognized. The first analogue, then digital camera records an exceptional cinematic haptic by its movement and rapid editing, often done by in-camera editing and by its visible grain. The films often become portraits by their cinematic character, even in the case of the subject landscape.

Dartmoor (1985) presents a treeless mire with rocks of granite strata. The camera moves in the landscape in sometimes abrupt turns walking around the rocks. However, the focus never seems to be aimless. The wind blowing into the microphone enhances the impression of a rugged and archaic beauty.

Einige Zeilen (some lines, 2012) on the other hand is a montage of digital shots from the tripod, which conveys a homely calmness, however associated with transience. Here also, the locally recorded sound is determinant for the film reception. The sound track commences with an utterance of the “father”, which even coming from offstage appears to be diegetic, as part of the act. The images, which include pictures of the resting or sleeping father, bear testimony of a humble but orderly domesticity. Slow movements inside the image create a soft calmness of limited duration.

Bude – Kommen und Gehen (kiosk, coming and going, 1995/2016) may be seen as exemplary for the work of Thiesmeier, who gives dignity to every day occurrences, without over-emphasizing their importance. On a presumably warm summer night, mostly men and some women meet at a Bude (kiosk). People know each other, however superficially. Drinking beer or smoking cigarettes, thoughts are being exchanged. The content of the conversation is less important than the exchange as such. Different ways of showing distance or compassion are being expressed. Filmmaker Thiesmeier uses three cameras and sound for recording. It is surprising, how well the team is being accepted by the participants and passer- byes, they unceremoniously become participants of the exchange of small gestures between everybody. It shows an openness towards the camera we would hardly experience today. For short moments a collective is built that shows equality between people who otherwise have very little in common. Through editing between different points of view, the “protagonists” become vivid, 3-dimensional and the Bude becomes a stage for these characters.

Images of one or more swifts are being shown in “Apus apus” (1985), the latin name for swifts. The recordings of Super-8 film during dawn are close to the technical limits of the camera. Thus, the flying skills of the birds can be rather guessed than seen clearly. The movements of the wings is too fast for 18/sec and almost disappears between the graininess of the gray dawn. Still, the enigma of analog film becomes beautifully apparent, the gray of the sky between the roofs becomes tangible as an almost textural experience, and the fascination to follow swifts with ones eyes on a silent late evening becomes prehensile.

This indicated aspect of the moment, an air of tranquility, is something we hardly experience in our current world of digitally reproduced momenta, captured, shared and received instantly on commercial „social media“. It makes the films of Theo Thiesmeier enjoyable and valuable. The intimate cinema of Z- Bar will be ideal to share and experience the notes and moments of Thiesmeier.
The artist will be present for a Q&A after the show. Curated by Klaus W. Eisenlohr.