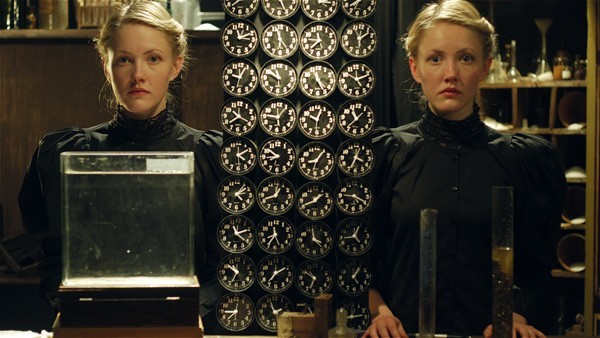 The Secrets Trilogy; a cycle exploring the imperceptible conditions that frame life.
All three works of the Trilogy deal with Time and Space.

Six Easy Pieces (2010) is the last work of the trilogy and is based on the book “Six Easy Pieces: Essentials of physics explained by its most brilliant teacher” by Richard P. Feynman.
It brings together the foundations of:
Film as the Seventh Art; a superb conciliation of the ‘Rhythms of Space’ and the ‘Rhythms of Time’ -Ricciotto Canudo
and
“Music is the pleasure the human mind experiences from counting without being aware that it is counting.” -Gottfried Leibniz.

Six Easy Pieces deconstructs film as the perfect synthesis of art and technology. Connecting art and science, as it romantically refers to an age when artists and scientists had similar concerns and were often one and the same person.

Secret Machine (2009) the second work explores these fundamental issues taking the 19th century scientist Eadweard Muybridge’s photographic experiments of motion sequences as a starting point. Reynolds reflects on the radical change in the understanding of Time and Space as developed in film and photography’s relationship to measurement, science, and the human body.

In Secret Life (2008) the first of the three-part cycle, a woman is trapped in an apartment filled with moving plants. She moves at a mechanical speed and her mind functions like a clock whose hands pin the events of her life to the tapestry of time. Her thoughts escape her and come to life, growing like the plants that inhabit the space around her: living, searching, feeling, breathing and dying. Reynolds suggests that all living things are endowed with consciousness. Philosophically and scientifically, the concept of time has been extensively discussed and investigated, yet its real nature remains unresolved; it has proven more mysterious and profound than life itself.