Profane is a feature length motion picture about a young Muslim Pro Domme in
the midst of a spiritual crisis. It explores the idea of submission from a religious,
psychological and sexual perspective. It is also a horror film about possession by a jinn. Jinn are the Islamic equivalent of demons. According to the Quran, Allah (God) created humans from clay, angels from light and jinn from smokeless fire. They are equally good and evil, and it is said that each of us has one of our own.
Profane is an inverted exorcism. The main character, Muna, has lost her jinn and is trying to bring it back into herself in order to feel whole again. She also
struggles to understand the culture and religion from which she has been
alienated. In the meantime, she journeys through a maze of indulgence, excess, and altered reality to find that her true self has been whispering to her all along.

Filmmaker Usama Alshaibi  is known for two things: his award winning skill as a documentarian on one hand, and darkly sexy, sometimes disturbing experimental films on the other. His latest endeavor, Profane, tackles dangerous territory in the fictional realm. Combining his flair for the moody audio-visual explorations of his characterʼs inner worlds and the no-nonsense intimacy of the interview, he is able to makes sense of a young womanʼs spiritual emergency.
His exploration of the lesser-known aspects of Islam is irreverent and defiant of
both tradition and stereotype. In one scene Muna observantly covers her head in the hijab, while leaving the rest of her body nearly naked. It begs the question, if God himself is the only one watching, and one is accustomed to being nude in front of strangers, then why couldnʼt a bra and panties constitute sincere modesty?
Profane is a never-before-seen collision of Middle Eastern mythology and
western pop culture. It draws inspiration from horror films, psychedelic cinema,
and documentation of real Islamic exorcisms. The director is also influenced by
events in his own childhood. After escaping the trauma of war in Iraq in the 5th
grade, Alshaibi experienced life in Saudi Arabia. There he lived in fear as
teachers beat him with rulers and rubber hoses for his inability to recite the
Qurʼan. 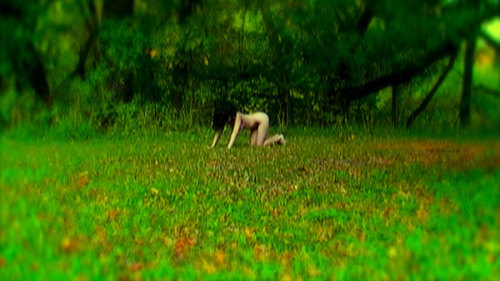 Through interviews, we find out that Muna has been alienated from her culture and abused within her religion. Her behavior as a teen became an embarrassment to her parents, prompting exorcisms while in the Middle East and several self-imposed exiles to the United States throughout her young life. Her audacious nature and promiscuous appetites lead her into sex work and
exploring the more illicit pastimes of young Americans. Within her adopted
environment she lost her sense of identity and even her language.
As we watch Munaʼs day-to-day life we are made privy to her sincere desire to
return to Islam, through prayer and attempting to read the Qurʼan. We
experience the subsequent supernatural events – real or imagined – that take
place as a result. We hear what Muna hears, though no one else in her world
seems to believe or understand whatʼs going on. They go on partying, paying
little attention to her affliction, which is indistinguishable from drug-induced
hallucination.
As an audience we follow Muna as she tries to reconcile her own very liberal
sensibilities with a stricter more dogmatic moral code imposed by fellow Muslims. In one pivotal scene after having befriended a cab driver named Ali, he offers to help her learn to read the Qurʼan. He appears one morning at her home flanked by a young Muslim Imam (religious leader). Muna and her best friend Mary have been up late frolicking in carnal and chemical exploration. The Imamʼs disgust with she and her friendʼs lack of decorum angers Muna and triggers her rage at past prejudices and abuses.
Sheʼs not about to give up her identity for her religion. She just wants to be
closer to God, and to know her own roots. This conflict is made manifest in the
Jinn. This troublesome invisible demon emerges from Muna as she struggles to
reconcile two seemingly incompatible sides to her personality. Itʼs only by
reintegrating with her personal mischievous spirit that she is able to feel whole
once again.