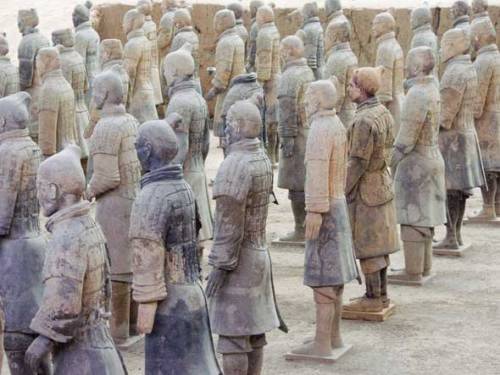 ›TERRACOTTA WARRIOR‹ 2006 by Pablo Wendel will be screened as part of our selection for the 6th Berliner Kunstsalon.

From March till August 2006 Pablo Wendel was a student at the Department of New Media, Performances and Body Language and Theatre at the China National Academy of Fine Arts in Hangzhou. His major works are performances which are documented by photos and videos (16:9). For his performances in China Wendel received great attention all over the world. The Terracotta-Army in Xi´an in the North West of China is one of the most important discoveries of the 20th century. 2200 years ago it was given to the first chinese imperior Qin Shihuangdi as a burial object. About 7000 lifesize terracotta warriors were build to guard the gigantic sepulchre construction. On september 16, 2007 student Pablo Wendel, disguised as a terracotta warrior, positioned himself for about 23 minutes between the more than 2000 year old soldiers. His costume consisted of a coat of mail, a hat of paper-mâché and shoes of old car tires. To appear as authentic as possible, he had even brought a pedestal to stand on during his performance.