The beginning is another movie, an American noir of the early 60s: gutted and disemboweled, tortured and “detourned” images organize themselves into precarious and evolving structures, intertwined in multiples and twisted plots in a state of permanent collapse. The aim is to incite the explosion of a closed system through a dispositive of audiovisual implosions. Forget what you see while you are actually watching it, and soak in a vibrating, optical ancestry. A scream without a reason.

The human eye can see the world through photoreceptive cells on the retina, a membrane sensitive to light emitted or reflected by objects. Light travels through time and space at a certain speed. For example, sunlight takes 8 minutes to get to our eyes, while from other stars it takes several lightyears.
Also the light generated or reflected by an object or a person on Earth takes a certain time, even if short and infinitesimal. There is a distance (short, eternal) between us and our image of reality. Even between thought and action, between thought and language, there is a similar lapse, necessary to transmit the signal via electrical impulses from the brain to different parts of the body.

“Miss Candace Hilligoss’ flickering halo” is a film about this distance, about the interval simultaneously separating and uniting, the silence between words, the black between pictures. It ’s a film against the dialectical opposites in cinema, assembled according to the Heisenberg’s uncertainty principle and the use of the phenomenon of retinal persistence as an expressive tool. Vincenzo Core, sound director, believes the audio element is not just a naturalistic comment of pictures, but rather a counterpoint between sound and images able to turn the experience into a real “audiovision ”. 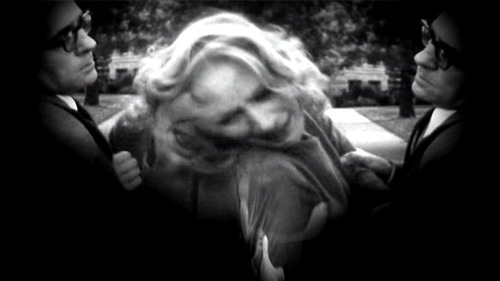 Fabio Scacchioli (Direction and editing) was born in Teramo in 1979. He studied in Perugia and Madrid, graduating with a thesis on the semiotics of experimental cinema. In 2006, he met Gianfranco Baruchello and attended his Foundation, taking part in meetings on artistic practice, participating in exhibitions and seminars, and collaborating on his latest film Another day, another day, another day. His research focuses on the relationship between memory, perception and thought. He works with film, video and installations.

Vincenzo Core (Music direction) was born in Giulianova in 1982. He studied electronic music with Alessandro Cipriani, at the “L. Refice” conservatory of Frosinone. Since 2008 composes for video, dance, installations and performances. His expressive research concentrates on the relationships between various compositional materials to trace paths of meaning, and to express the complexity and vitality of Self.