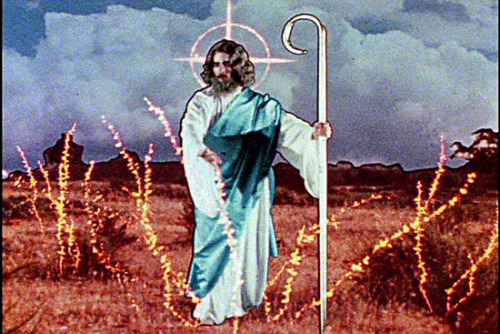 ”The Divine Miracle,” ”Babobilicons,” (the title is a word she invented) and ”Summer Light” — will be shown today as a special feature.

Ms. Krumins spent nine years making ”Babobilicons,” which she finished in 1983, and 17 on ”Summer Light,” which she completed last year. For much of that time, computerized graphics were not available, and Ms. Krumin had to hand-paint frames and use other time-consuming ways to create special effects.

”My way of seeing the world or reassembling it in my mind is unconventional,” admitted Ms. Krumins, whose spotless kitchen and excellent apple crisp seemed at odds with the fact that she grew slime mold in her basement for ”Babobilicons.”

”You grow it on oatmeal, and you cover it, and then the stuff moves up the dish and on to the floor,” she said. ”It’s half animal, half plant. I had to play with it a lot until I figured out the condition that would make it move away.”

Now her basement is filled with the detritus of her craft: deer antlers, fish bones, seashells and feathers, among other things.

“Summer Light” come from my texture-driven, non-neurotypical way of finding delight and meaning. It’s not verbal meaning, All I say in words is that it does, in fact, have meaning. In a way, it is my world. Daina Krumins

“Daina Krumins’s BABOBILICONS is a truly surrealist work in terms of both its process and product. Krumins takes time to make her films. It took her nine years to create this remarkable animated short, yet her method is in line with the surrealist affinity for chance operation. She cultivated slime molds on Quaker five-minute oats in her basement, planted hundreds of phallic stink-horn mushrooms, and put her mother behind the camera to film them growing. The results are sexual and bizarre. She combined ordinary objects – wall sockets, candles, and peeling paint – to get unnerving, dreamlike images. Porcelain fish jump through waves; mushroom erections rise and fall. Her Babobilicons – robotlike characters that resemble coffee pots with lobster claws – move through all this with mysterious determination. Anyone who orders 10,000 ladybugs from a pest control company to film them crawling over a model drawing room definitely possesses a sense of the surreal.” – Renee Shafransky, The Village Voice

“An intriguing composite of what looks like animation and pageant-like live action is THE DIVINE MIRACLE, which treads a delicate line between reverence and spoof as it briefly portrays the agony, death and ascension of Christ in the vividly colored and heavily outlined style of Catholic devotional postcards, while tiny angels (consisting only of heads and wings) circle like slow mosquitoes about the central figure.” – Edgar Daniels, Filmmakers’ Newsletter